Recovering Team India pacer Jasprit Bumrah was supposed to prove his match fitness by featuring in the Ranji Trophy game between Gujarat and Kerala, which began at the Lalabhai Contractor Stadium in Surat on Wednesday, Christmas day. However, in the latest development, Bumrah has given the match a miss.

The Indian pacer has not played any international cricket for India since the Test series in West Indies. He was recently picked in the Indian team for the T20s and ODIs against Sri Lanka and Australia at home. The Ranji match was being seen as a possible indicator to his fitness. 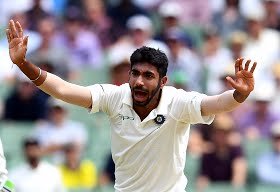 As per media reports though Bumrah was a little worried about this comeback route, and is said to have had a word with BCCI president Sourav Ganguly and secretary Jay Shah over the game. Following this, Bumrah was allowed to skip Gujarat's Ranji encounter against Kerala, and is now likely to feature in the Sri Lanka series early next year.

"There's much time for the Test series in New Zealand. In fact, the first Test begins on February 21, next year. Until then, he doesn't play any red ball cricket. So there was no hurry. He can start bowling four overs in a T20I game for now and play a Ranji Trophy match possibly closer to when it's time to fly to New Zealand," sources told Times of India.

The report also claimed that the Gujarat management was unhappy with the national selection request to allow Bumrah to bowl just 4-8 overs a day, as it would affect the balance of the team badly. Bumrah bowled in the nets during a training session ahead of the second ODI against the West Indies in Visakhapatnam.

The 26-year-old has been India's number one bowler in all three formats over the last two seasons. He has 62 wickets in 12 Tests, 103 in 58 ODIs, and 51 in 42 T20Is. In the second Test against West Indies at Jamaica, he claimed a hat-trick, becoming only the third Indian after Harbhajan Singh and Irfan Pathan to do so.

India, under Virat Kohli, finished the year ranked number one in Tests, remaining unbeaten in 2019. They were impressive in ODIs as well, but for the shock upset in the World Cup semi-finals against New Zealand.