Ahmed Shehzad’s brilliant century helped Pakistan to a massive win over Bangladesh. Shehzad became the first Pakistani to score a century in T20Is

Ahmed Shehzad’s brilliant century helped Pakistan to a massive win over Bangladesh. Shehzad became the first Pakistani to score a century in T20Is. His efforts powered Pakistan to 190 for 5.

Shehzad carried his bat through to score 111* from 62 balls with 10 fours and 5 sixes. Shahid Afridi gave some finishing touches with 22 from 9 balls. 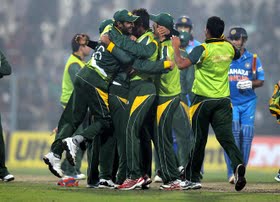 In reply, Bangladesh were restricted to 140 for 7 with Umar Gul taking 3 for 30. Shakib Al Hasan was Bangladesh’s top scorer with 38 from 32 balls.

Toss and Teams: Pakistan have won the toss and elected to bat first against hosts Bangladesh at the Shere Bangla National Stadium. It is a must win game for Pakistan to keep their hopes alive of a semi final berth. Bangladesh are already out of the tournament.