India captain Virat Kohli raked up a controversy during the Test series against Australia earlier this year when he accused Aussie skipper Steve Smith of taking help from the dressing room for DRS. Smith now has rubbished Kohli's claim.

"It wasn't until afterwards that I realised what a talking point it had become, fuelled by Kohli's post-match claims that we'd called on off-field assistance twice earlier in the match to help our on-field deliberations," Smith said in his book, The Journey according to a Cricinfo report.

"As far as I was concerned, we'd never tried to consult with the dressing room beforehand and although he said he'd brought those previous occasions to the notice of the umpires, I can say categorically that we were never spoken to by either those umpires or match referee Chris Broad about any such breaches in protocol. 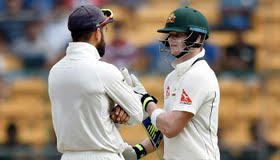 "Virat has always been a player who's thrived in the most intense of environments, and like me he loves a battle and I can only think it was his way of raising the temperature in the series in an attempt to get the best out of himself. The idea of getting messages from the sidelines for that purpose was not a tactic we as a team ever spoke about and I can't work out what he was referring to in his remarks.”