Under pressure Azhar Ali has stepped down as captain of the Pakistan one-day team. Azhar was in charge of the team as they crashed to a 1-4 defeat in Australia. Wicket-keeper batsman Sarfraz Ahmed will be Pakistan's new ODI skipper.

Under pressure Azhar Ali has stepped down as captain of the Pakistan one-day team. Azhar was in charge of the team as they crashed to a 1-4 defeat in Australia. Wicket-keeper batsman Sarfraz Ahmed will be Pakistan's new ODI skipper. Ahmed is currently the captain of the T20 team.

PCB chairman Shaharyar Khan confirmed to ESPNcricinfo, "Azhar agreed to relinquish his captaincy as he believed that his batting is being effected due to extra burden of leadership.

"I respect his decision and he will continue to play as batsman in one day team, but now we all decided that Sarfraz will be handed the ODI captaincy," Khan went on to add.

Azhar will not be part of the next ODI Pakistan features in as he has been handed a one-match suspension owing to the slow over rate maintained by the team during the forgettable tour of Australia. 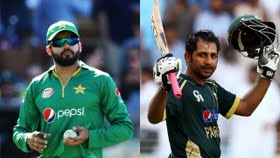 According to the espncricinfo report, Pakistan's ODI leadership came up for discussed in January at a meeting which was attended by Shaharyar, chief selector Inzamam-ul-Haq, and Mushtaq Ahmed. The trio, it is said, were firm even back then that Sarfraz should be handed over the reins of one-day leadership. But, they were waiting on Misbah-ul-Haq to retire so that a new Test captain could be named.

Pakistan struggled under Azhar's leadership, with their ranking slipping down to as low as ninth. They are right now at number eight, which means they are still in the running for direct qualification to the 2019 World Cup, and have also gained a spot in the Champions Trophy.

Out of ten bilateral series' in which Azhar led, Pakistan won five. But, two of them against Zimbabwe, one against Ireland, and one each against Sri Lanka and West Indies. Overall, Pakistan won 12 and lost 18 games with Azhar as leader.

Last September, Pakistan lost 4-1 loss in England, but then whitewashed West Indies 3-0 in the UAE. This was followed by the terrible results in Australia. While Azhar has been in excellent form in Tests, the same cannot be said about his ODI performances.