The West Indies claimed two late wickets to place themselves on level terms with the visitors at stumps on todays first day at North Sound. On a very pedestrian day when the spectators who ventured to the Sir Vivian Richards Stadium would have struggled to stay awake, Martin Guptil scored a painstaking 97 to guide New Zealand to 232/4.

The West Indies claimed two late wickets to place themselves on level terms with the visitors at stumps on todays first day at North Sound. On a very pedestrian day when the spectators who ventured to the Sir Vivian Richards Stadium would have struggled to stay awake, Martin Guptil scored a painstaking 97 to guide New Zealand to 232/4. At least those watching at home on television could switch the channel or retreated to their beds rather than endure the 2.57scoring rate in this quick-scoring age. 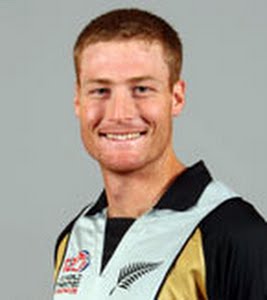 Yet the cricket was at times gripping. But for his moment of madness when within a stroke of what would have been a well deserved third test hundred, Guptil gave yeoman service to his country by batting to within three overs of the day’s play, using up all of 249 deliveries and striking 14 fours and one beautifully struck six. His greatest asset was his patience—that and the co-operation he and his opening partner received from Kemar Roach and Ravi Rampaul in allowing them to ignore so many deliveries.

New Zealand won the toss and with the sun bearing down on the Sir Vivian Richards Stadium theychose to bat. The surface was reasonably slow but there was considerable swing through the air and some deviation off a surface not totally devoid of grass. But if Roach did not bowl an insistent enough line Rampaul needed to have been a bit more full with his length, and together they did not exert enough pressure on the visitors.

The New Zealand openers started steadily. Only 11 runs came from the first eight overs, with the first boundary hit in the day’s 10th over. Martin Guptil was the more assured batsman, while Daniel Flynn was more intent on making use of whatever scoring opportunities came his way. Despite a few alarms both batsmen went to lunch unscathed, and not even the greatly anticipated introduction of Sunil Narine caused them much discomfort. Guptil was even confident enough against their limited overs games tormentor the lift him high down the ground for six.

Shortly after lunch the Trinidadian spinner achieved the first of what he hopes will behundreds of test wickets. Narine had been dropping short too often and Daniel Flynn had been taking full toll. But on 45 he received a short ball that bounced more than he expected and the top-edge went down the throat of Kieran Powell at point.

As usual, Brendon McCallum was intent on aggression. Perhaps too intent, and on 25 he could not get to the pitch of a wide one from Roach and slapped it hard to NarsinghDeonarine at mid-off.

McCallum was dismissed in the 50th over and thereafter the West Indies toiled without reward until the day’s 85th over as Guptil and captain Ross Taylor added 90 runs. After an untidy 17 over spell either side of the lunch break, Sunil Narinereturned with more spite in the last session to grab two wickets to ensure that the visitors did not get too far ahead. Guilty of not pulling the batsmen forward often enough he adjusted his length and added more flight in his second spell. The fuller length forced the batsman forward and the greater loop elicited more bounce from the track and the batsmen became decidedly uncomfortable. For the first time in his very short test career he seemed capable of inflicting considerable damage on the opposition and the batsmen had a difficult time coping with his each-way turn and especially with the steep bounce he coaxed from the pitch.

Taylor was unlucky to get out to a short ball that hit his stumps after ricocheting from his glove, but he was lucky to have survived till then.

Then in his next over, the impressiveGuptil, almost flawless until then, needlessly committed suicide in trying to reach his century in one hit.

Daniel Vettori would have been watching closely at the assistance Narine was obtaining from the surface and he is not likely to waste two sessions before finding his range.