Wicket Keeper and Vice-Captain Dinesh Ramdin has been ruled out of action with a fractured right thumb. Ramdin will be replaced with Carlton Baugh in the West Indies Squad for the first three ODIs against Australia at St Vincent. 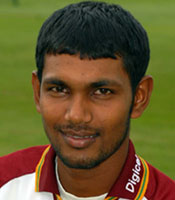 Ramdin suffered the injury when he was batting in a warm-up match for the West Indies. The Trinidadian is expected to be out of action for a minimum of two weeks. The West Indies will name a new Vice-Captain following the absence of Denesh Ramdin.

The first Digicel ODI between West Indies and Australia will be on the 16th of this month at the Arnos Vale Cricket Ground in St Vincent.