IPL 2016 Live Score: Kolkata Knight Riders will take on Rising Pune Supergiants in match number 45 of the Indian Premier League at the Eden Gardens in Kolkata.

Kolkata Knight Riders will take on Rising Pune Supergiants in match number 45 of the Indian Premier League at the Eden Gardens in Kolkata. The hosts were undone by Gujarat Lions in the last league encounter at Eden Gardens by five runs. Still, they are in a decent position to qualify for the last four, with six wins from 10 matches. A couple of more wins could see them through. Pune, on the other hand, are out of the reckoning, with three wins from 11 matches. All then can do now is look for some consolation wins. 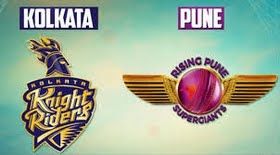 Kolkata's batting let them down against the Lions, but they have been good with the willow in a number of games. At the top of the order, Gautam Gambhir and Robin Uthappa have played some stellar knocks for the team. Kolkata will be hoping for them to carry on the good work. Also, Shakib Al Hasan and Yusuf Pathan batted well in the last game against Lions, although they ended up on the losing side. The recent form of Yusuf has been encouraging especially after his struggles earlier in the tournament. Suryakumar Yadav has also excelled with the bat in a few games.

Kolkata's bowlers have also done reasonably well. Morne Morkel has been effective in most matches he has played. Sunil Narine may not be the mystery force he once was, but remains a threat nonetheless. Umesh Yadav has been inconsistent but has done well in a couple of games. Brad Hogg began the tournament on an impressive note, but hasn't been needed much since. One of the big reasons why Kolkata have done well with the ball this season has been because of the performance of leggie Piyush Chawla, who has been consistent with his efforts.

Injury-hit Pune have never really got into any sort of rhythm in the tournament after the initial impressive win against Mumbai Indians. Ajinkya Rahane has been the only positive for Pune in the batting department. He has been consistency personified, but has found little or no support. Of course, it hasn't helped that big names likes Faf du Plessis, Kevin Pietersen and Steven Smith have fallen to injury one by one. Most disappointing has been the form of MS Dhoni, who just hasn't looked the part.

Pune's bowlers have done slightly better than their batsmen. Although they ended up losing their last match, Australian leggie Adam Zampa was absolutely sensational with figures of 6 for 19. It will be difficult for the slow bowler to repeat such kind of performance, but he will clearly be looking to make some kind of an impression. Rajat Bhatia has been the other consistent bowler in the team, bringing all his vast domestic experience into play. Ashok Dinda has done well in a couple of games, but he needs to improve his consistency for sure.