West Indies fast bowler Jerome Taylor on Tuesday announced his retirement from Test cricket, at the relatively young age of 32

West Indies fast bowler Jerome Taylor on Tuesday announced his retirement from Test cricket, at the relatively young age of 32. In a career marred by injuries, Taylor played 46 Tests and claimed 130 wickets at an average of 34.46 with four five-wicket hauls. Taylor made his entry in international cricket at the relatively young age of 18, being plucked from Jamaica. After an impressive start, constant injuries kept him out of the team from 2009 to 2014. He did made a comeback recently, and performed with mixed success, but it seems his body has taken enough in the longer version of the game. 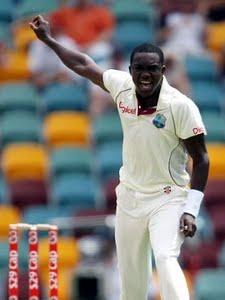 With Taylor having retired, here’s a look at some of his best performances in the Test format.

5 for 11 and 3 for 74 against England at Jamaica, February 2009: This was undoubtedly Taylor’s standout performance in his Test career. In England’s second innings, Taylor ran through the England line up with figures of 5 for 11. England were rolled over for merely 51 as West Indies won by an innings and 23 runs. Taylor, as was his habit on his good day, picked up the big players. In this innings, he picked up Andrew Strauss, Alastair Cook, Kevin Pietersen, Paul Collingwood and Matt Prior. In the first innings as well, he had taken three wickets, dismissing Strauss and the tail.

6 for 47 against Australia at Jamaica, June 2015: In the second Test of the series, Australia batted first and posted 399; Taylor was the best of the West Indian bowlers with 6 for 47. He got a number of big batsmen out in the innings. The list featured David Warner, Shaun Marsh, Steven Smith (for 199), Adam Voges, Shane Watson and Brad Haddin. West Indies crumbled with the bat though and lost the Test by 277 runs.

5 for 50 and 4 for 45 against India at Jamaica, June-July 2006: Again, Taylor’s effort came in a losing cause, but it was a superhuman-like effort nonetheless. Taylor’s five-for in the first innings kept India down to 200. He sent back Wasim Jaffer, Yuvraj Singh and Mohammad Kaif. In the second innings, he again sent back Jaffer, and this time also added Virender Sehwag and MS Dhoni. Chasing 269, West Indies lost by 49 runs. Current India coach Anil Kumble’s six-for in the final innings decided the match.

5 for 91 and 2 for 75 against Pakistan at Multan, November 2006: In a drawn match, Taylor again impressed. Bowling first, he got the big wickets of Mohammad Hafeez, Younis Khan and Inzamam-Ul-Haq as Pakistan made 357. West Indies had to toil hard in the second innings, but he still managed to dismiss Hafeez and Inzamam. This was a high-scoring match for the batsmen. Brian Lara made 216 while Mohammad Yousuf made 191.