IPL 9: Gujarat Lions lost it towards the end

Gujarat Lions will look back at their debut IPL season with mixed results. On one hand, they should be extremely pleased with the fact that they made it to the last four in their first season itself

Gujarat Lions will look back at their debut IPL season with mixed results. On one hand, they should be extremely pleased with the fact that they made it to the last four in their first season itself. But then, while it was a first time for the team as a whole, it wasn’t actually new for the players on an individual level. In fact, a number of the players in the squad have featured in IPL winning teams in the past. In that sense, there should be a tinge as disappointment as well, since they were so near yet so far.

What will hurt the Lions most about their ouster from the tournament towards the end is that they had two chances at making the final, and came extremely close to achieving their goal, but ended up floundering on both occasions. In the first qualifier, they had Royal Challengers Bangalore on the mat, before AB de Villiers took the game away. Then, in the second qualifier, they had Sunrisers Hyderabad in big trouble, but could not see the back of opposition skipper David Warner. And that, pretty much cost them a place in the final. 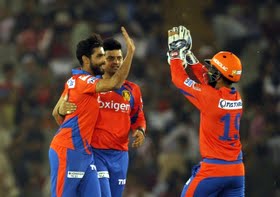 Gujarat Lions had an excellent start to their IPL 9 campaign, winning their first three matches in a row, against Kings XI Punjab by 5 wickets, Pune by 7 wickets, and then Mumbai Indians by three wickets. In all the three games, Aaron Finch came up with half-centuries opening the innings. After a loss to Hyderabad by 10 wickets, they again fought back strongly with a hat-trick of wins, registering wins against Bangalore, Delhi and Pune. The wins took Lions to the top of the table, where they eventually finished up, but not before a few hiccups, including a hat-trick of losses.

While Finch was the among the star performers for the side, with 393 runs from 13 games at a strike rate of 131.43, he was out for a few games due to injury, which hurt the team’s momentum to some extent. But, Lions were lucky to find a good replacement in Dwayne Smith, who waltzed 324 runs in 12 games at a strike rate of 146.60 with three fifties. He also starred with the ball in one of the games. But, his opening partner wasn’t as consistent, and considering that name was Brendon McCullum, it hurt the team in a big way. McCullum finished with 354 runs from 16 games, too few for a seasoned opener.

At the end of the day though, it were Lions’ bowlers who let them down. Dhawal Kulkarni finished with 18 wickets, at an impressive strike rate. He was brilliant against Bangalore, but couldn’t deliver against Hyderabad. Dwayne Bravo also bowled well for his 17 scalps, although he was way too expensive. Praveen Kumar however struggled, managing only nine wickets, as did Ravindra Jadeja, who finished with just eight scalps. As the tournament, approached the business end, this is where they struggled. Above all, skipper Suresh Raina failed to deliver at the key moments.