Hardik Pandya's innings was the game-changer

Indian skipper Virat Kohli was extremely pleased with India's showing against Australia on Sunday, especially the fightback from the lower order at Chennai.

"It's a good sign for us that our lower order batting is firing. It was an all-round display and I am very happy," Kohli said in an IANS report, after India won the match comprehensively. 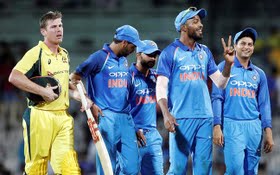 "This is a pleasing win because we were in a tough situation. M.S. (Doni) and Kedar (Jadhav) played well early, Hardik (Pandya)'s innings was fantastic. And MS finished off the way he does," Kohli added

Asked specifically about Pandya, Kohli raved, "He believes in himself. That is the key in international cricket. Hardik's innings was the game-changer. He is smart with the ball as well.”