New Zealand defeated Sri Lanka 3-1 in a rather one-sided contest in the one-dayers. Here’s a look at the successful performers in the ODI series

New Zealand defeated Sri Lanka 3-1 in a rather one-sided contest in the one-dayers. Here’s a look at the successful performers in the ODI series.

Martin Guptill: The New Zealand opener was once again the standout performer in the series. In five matches, he ended up with an impressive tally of 331 runs at an average of 82.75 with one hundred and two fifties. He kicked off the series with 79 and a blistering 93 not out at Christchurch, and ended it with a measured 102 in the final ODI, as New Zealand eased to a series victory. Guptill’s performance in the series has only reiterated his growing stature as a destructive opener in one-day cricket.

Kane Williamson: The number three bat was available for three of the five games. Still, he ended up making an impression. Williamson made 132 runs in three innings at an average of 44 with two half-centuries. Williamson got 59 at Nelson and 61 at Mount Maunganui. He played a good support act to Guptill in the series. In Brendon McCullum’s absence, Williamson also led the side. It is too early to make a statement on his leadership. 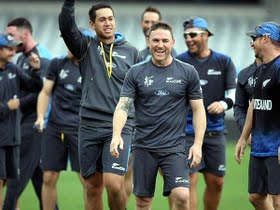 Milinda Siriwardana: In a series dominated by a couple of batsmen from New Zealand, Siriwardana was the top run-scorer for the Lankans. In three innings, he managed 117 runs at an average of 39 with one half-century. A man with immense domestic experience, Siriwardana scored 66 at Christchurch and 39 in the final ODI. With the ball, he also claimed three scalps. A definite find for Lanka on this tough tour, which will conclude with the T20s.

Matt Henry: The Kiwi medium pacer ended up as the top wicket-taker in the series. He was a constant threat to the Sri Lankans, with 13 wickets in three innings at an average of 9.38, an economy rate of 4.11 and a wonderful strike rate of 13.6. Henry was consistency personified, claiming 4 for 49 and 4 for 33 in the two matches at Christchurch, and finishing the series with 5 for 40 at Mount Maunganui, which scuttled Sri Lanka’s hopes of squaring the series. In a short ODI career, he has proved to be extremely impressive.

Mitchell McClenaghan: The left-arm medium fast bowler finished the series with six wickets in three innings at an average of 18.50, a strike rate of 27 and an economy rate of 4.11. McClenaghan was among the wickets for most games, and also kept things tight. He claimed 2 for 40 and 3 for 32 in the two matches at Christchurch, and claimed 1 for 39 at Nelson. McClenaghan is definitely improving with experience.