Australia defeated West Indies by 39 runs in the Third ODI at Canberra to take an unassailable series lead of 3-0.

West Indies went down fighting chasing a massive target in the third ODI at Canberra to concede the 5-match ODI Series to Australia 0-3. Shane Watson making his comeback after his calf injury, returned with a bang scoring a 7th ODI century to star in Australia’s 39-run victory.

Australia piled up 329/7 on the board batting first on a placid track at the Manuka Oval. Watson went onto score 122 from 111 balls with a dozen fours and 2 sixes. Another chief contributor for the homeside was Phil Hughes who started off very slowly but made up to score 86 from 93 balls with 10 fours and a six. Australia had a good finish with George Bailey came up with a cameo of 44 (from 22 balls with 6 fours and a six). One of the highlights of the Australian innings was a stunning leaping one handed catch at the deep mid wicket boundary from Kieron Pollard which robbed Glenn Maxwell of a certain six. 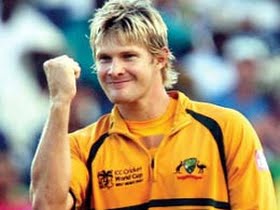 West Indies did well to stay in the hunt chasing the huge target of 330. There was an early setback for the Windies with Chris Gayle not able to open the innings because of a side strain. After an initial impetus from Kieran Powell (47 from 49 balls), the West Indies surged ahead through a breezy partnership between the Bravo brothers. Dwayne Bravo scored a 50-ball 51 (with 5 fours) and Darren Bravo came up with an attractive 86 (from 96 balls with 7 fours and a six) but couldn’t last the distance to take their team to the finishing line.

The visitors were nicely placed at 195 for 2 in the 35th over thanks to the Bravo brothers before they had a mini collapse to slip into a losing position. Australia got wickets at crucial moments, including that of Chris Gayle, who came in at no.6 but only to score two runs. Left-arm pacer James Faulkner picked up 4 for 48 mixing quite a lot of slower ones with straight yorkers to win the match for the hosts. West Indies did go down fighting as they put up 290 on the board in 47.3 overs before getting bowled out. Andre Russell provided some late entertainment with his power-filled cameo of 43 (from 31 balls with 6 fours and a six).

Toss and Teams: Hosts Australia have won the toss and elected to bat first in the Third ODI at the Manuka Oval in Canberra. West Indies are in a must-win situation having lost the first two ODIs. Australia have made one change with Shane Watson coming in the place of Usman Khawaja and West Indies have brought in Andre Russell for Jason Holder.