Champions Trophy 2013: How the teams fared

With the seventh and, in all likelihood, the final edition of the Champions Trophy coming to a conclusion, we rate the performance of the eight teams that featured in the event.

With the seventh and, in all likelihood, the final edition of the Champions Trophy coming to a conclusion, we rate the performance of the eight teams that featured in the event. 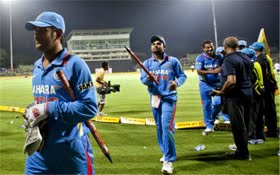 The Champions Trophy champions had a flawless tournament. Right from the warm up matches to the final they were undefeated. The only time India looked vulnerable was during the final against England, but even there they managed to hold their nerve and get the better of the hosts. There were many amazing performances from Indian players, Shikhar Dhawan and Ravindra Jadeja being the two standout performers –one winning the Golden Bat and the other the Golden Ball. Even as Jadeja was the leading wicket-taker, he also contributed two crucial knocks with the bat. All the others like Virat Kohli, Dinesh Karthik and Rohit Sharma chipped in at various points to make India’s progress possible. With the ball, Ravichandran Ashwin, Bhuvneshwar Kumar and Ishant Sharma shone at opportune moments.

The hosts came mighty close to lifting the trophy, but faltered right at the end. In fact, it wouldn’t be wrong to say that they let the final slip from their grasp. Still, a runner-up position is a fair refection of their standing. They were indeed the second-best side in the event. They were top class against old nemesis Australia and New Zealand in the group stages, and only individual brilliance thwarted them against Sri Lanka. They raised their game wonderfully well in the final to oust South Africa. Jonathan Trott showed his prowess with two fine half-centuries even as skipper Alastair Cook, Ian Bell and Joe Root put their hands up at different stages of the tournament. With the ball, Anderson, Broad and Tredwell shone brightly.

The Lankans recovered from an early setback to crush Australia and England en route to their progress to the semi-finals. But, on the big day, they faltered against familiar opponents India. The big guns like Dilshan, Sangakkara and Jayawardene couldn’t withstand the Indian challenge as the Lankans bowed out in the final four stage.

It’s now official. South Africa choked again. Duckworth/Lewis favoured them for a change, as they got into the semis on the basis of the rain rule, ousting West Indies. But, the semi-final jinx continued for them. Their batting performance against England was shabby, which meant they were once again knocked out ahead of the final.

The defending champions were poor from the very start. The absence of classy Michael Clarke was clearly felt, and David Warner’s bar brawl made matters worse. On the field, only stand-in skipper George Bailey and Adam Voges made any kind of impact with their batting.

The Kiwis huffed and puffed their way to a win on the back of a brilliant bowling performance against Sri Lanka. They were unlucky that the game against Australia got rained out, but still had a chance to put it across England in a close chase. Barring Kane Williamson, no one put their hands up though.

The Caribbeans were plain unlucky as the D/L method came in their way of qualifying for the semis. Kieron Pollard’s dismissal in Windies’ last group against South Africa was followed by rain, which threw them out of the event. Earlier, their exploited Pakistan’s weaknesses, but couldn’t overcome India’s strength.

There were the poorest side in the event. Their batting was terrible in all three games. The one point they get is solely for skipper Misbah-ul-Haq’s lone defiance.