If it doesn’t matter then why play: Nehra slams Kohli for 'ODIs not relevant' statement in New Zealand

Former India pace bowler Ashish Nehra feels that Indian captain Virat Kohli should have refrained from stating that 'ODIs are not important' after the series loss in New Zealand. It may be recalled while India whitewashed the Kiwis in the T20Is, the failed to win a single match in the ODI series and Tests that followed.

Following India's 0-3 defeat in the one-dayers, Kohli made a bizarre statement that in the year of World T20 and World Test Championship, one-dayers are not as relevant. Reacting to the same, Nehra told Indian commentator Akash Chopra on the latter’s show Aakash Vani that it was not the right thing for Kohli to say. 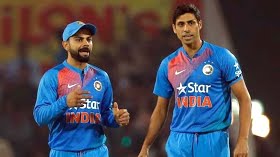 According to Nehra, it would have been a different thing had Kohli said the same after India won the series. “If you win and tell this it’s a different thing. It’s wrong to say that the year is for T20s and so we don’t care about 50-over matches," the ex-India paceman stated.

"If it doesn’t matter then why did you even come to play. Are you trying to tell that the Indian team didn’t try to win those ODI matches against New Zealand. I don’t agree with Virat Kohli’s statement,” Nehra added in the same chat with Aakash Chopra.

The 41-year-old, who finished his ODI career with 157 wickets in 120 matches, stated that while Kohli's reputation as a world class batsman is beyond question, his captaincy is still a work in progress.

“Virat Kohli as a player needs no recognition as his career graph tells the entire story. Kohli as a player has done amazingly well, in captaincy I still feel he is a work in progress. I can say he is a little bit impulsive captain,” he added.

According to Nehra, the current Indian team cannot be compared to the dominating Australian side of the 2000s, as they haven't been consistent enough. “This Indian team is far from the Australia team. You are talking about an Australian team which won 3 consecutive World Cups, reached the final in 1996, won 18-19 Test matches in home and away conditions.

"It’s not like this Indian team cannot reach there but I believe the core group is very important. A person gets confused after watching many dishes on the table and so it’s important to have fewer but better dishes,” Nehra explained.