When there's swing and seam, it is very exciting in white-ball cricket: Bumrah after six-for destroys England

India pacer Jasprit Bumrah has admitted that the white ball swinging helped him as he claimed career-best figures of 6 for 19 in the first one-dayer against England at The Oval on Tuesday (July 12). Bumrah and Mohammed Shami (3 for 31) made great use of the swinging conditions as the Men in Blue bundled out England for 110 in 25.2 overs. The openers Rohit Sharma (76*) and Shikhar Dhawan (31*) then featured in an unbeaten 114-run stand as India got home in 18.4 overs.

England’s batters were all at sea as Jason Roy, Joe Root, Ben Stokes and Liam Livingstone perished without scoring. Except Stokes, who was dismissed by Shami, the other three big wickets went to Bumrah. England captain Jos Buttler top-scored with 30 while David Willey contributed 21 to push the hosts to three figures.

Speaking after claiming the Player of the Match trophy, Bumrah asserted about the conditions, "When there's swing and seam movement, it is very exciting in white-ball cricket to get that opportunity because you have to be defensive with the kind of pitches we usually get. 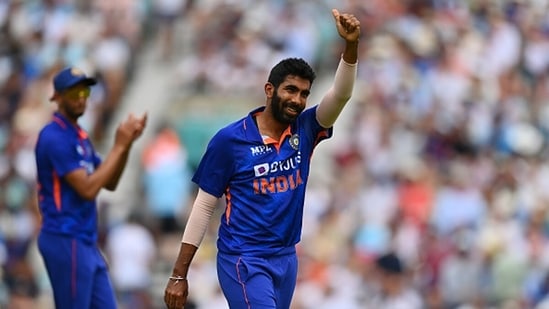 “When I bowled the first ball, I found some swing and we tried to exploit that. When it doesn't swing, I have to pull my lengths back. When the ball is doing something you don't have to try a lot. When the wicket is flat your accuracy is tested. It is a good place to be when the ball is swinging,” he added.

The 28-year-old revealed that as soon as Shami bowled the first over, they had a conversation to go fuller. Praising his senior partner, Bumrah said, “Very happy for him, he gets a lot of wickets. I told him when he beats the bat, that there would be days when he'd run through the side."

Apart from Bumrah and Shami, skipper Rohit Sharma also shone for India with a fine half-century. Rohit and Dhawan featured in their 18th century stand in ODIs on Tuesday as India completed a thumping win. Speaking about the opening partnership, the Indian captain said, "Shikhar and me understand each other quite well, except for the first ball where there was that misjudgement. He is playing ODIs after a long time. We know what he brings to the table for us.”

Reacting to the stunning loss, England captain Buttler admitted that he was surprised by the amount of swing that was on offer. He commented, "Very tough day to take, but we've got to dust ourselves down quickly. Little surprised by the movement, bit muggy. India exposed the conditions superbly. They have bowled really well in the powerplay.”

India and England will now meet in the second ODI of the three-match series at Lord’s on Thursday (July 14).