Afghanistan will face Scotland in match number 17 of the T20 World Cup 2021 at the Sharjah Cricket Stadium on Monday. The game will be played as part of the Group 2 encounters in the Super 12 round of the ICC event. The Afghanistan vs Scotland clash will begin at 7:30 PM IST and 6 PM local time.

Afghanistan cannot take Scotland lightly as they have progressed to the Super 12 after a highly impressive Round 1 in which they won all their three matches, stunning Bangladesh as well. Afghanistan had a mixed run in their warm-ups. They went down to South Africa by 41 runs but bounced back strongly to thump West Indies by 56 runs. The victory against the defending champions would have been a big morale-booster for Afghanistan.

Scotland were not expected to make the Super 12 round. But they would have started believing once they got the better of Bangladesh by six runs in a close encounter. The victory over Papua New Guinea was on expected lines. The manner in which they thumped Oman, by six wickets, was a declaration that they are not here to make the numbers. 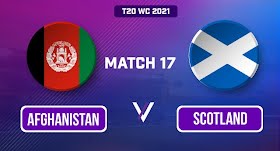 While they had a tough match against the Proteas, Afghanistan registered a lot of positives against West Indies. Hazratullah Zazai and Mohammad Shahzad both crunched fifties and the others also got among the runs. When Afghanistan bowled, Mohammad Nabi led from the front with three wickets while the rest did not let the pressure ease.

For Scotland, Josh Davey, Safyaan Sharif and Michael Leask were brilliant with the ball against Oman. In Richie Berrington, Kyle Coetzer, George Munsey and Calum MacLeod, they have an experienced batting line-up.