The rift between Rohit-Kohli? Here's what bowling coach Bharat Arun has to say

Following India's shock exit from World Cup 2019 due to the semi-final loss to New Zealand, reports started doing the rounds of an alleged rift between Indian skipper Virat Kohli

Following India's shock exit from World Cup 2019 due to the semi-final loss to New Zealand, reports started doing the rounds of an alleged rift between Indian skipper Virat Kohli and his deputy Rohit Sharma. If some media reports were to be believed, Team India was split into two camps -- one close to Kohli and another backing Rohit.

One more report went to the extent of stating that the BCCI will look into the matter of the alleged rift. Speaking out for the first time after the controversy broke out, Indian bowling coach Bharat Arun shed some light on the Kohli-Rohit relationship. 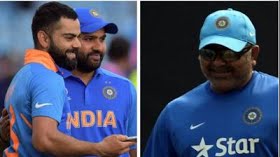 In an interview to Sportstar, Arun claimed that Team India's captain and vice-captain shared a very healthy and cordial relationship.

“It has to be seen to be believed. Rohit often runs up to Kohli to discuss things. They get along very well, share a great admiration for each other’s ability. Kohli led the side well, is maturing as a captain and it’s nice that he has Rohit for support. The spirit in the camp was wonderful throughout,” Arun was quoted as saying by The Sportstar.

Asked about the team dynamics and if there were any instances of the difference of opinion in the dressing room, Arun added that there is a debate on key issues and that all members have their say before a final decision is taken.

“It’s not that we agree on everything. We have our arguments and discussions on various aspects like the composition of the team and the strategy. Everyone voices his opinion. But at the end of the day, the other person’s view is respected and a collective decision is taken,” Arun further said in the interview.

With the World Cup dream over, India now takes on West Indies for a full tour. Virat Kohli has not been rested, unlike what some reports suggested earlier.