Little went right for New Zealand at Antigua as they succumbed to yet another defeat in the series against West Indies. And from the evidence on display, it seems not much is likely to change at Sabina Park, Jamaica as well.

Little went right for New Zealand at Antigua as they succumbed to yet another defeat in the series against West Indies. And from the evidence on display, it seems not much is likely to change at Sabina Park, Jamaica as well. With the loss of veteran Daniel Vettori to injury, another major blow has been dealt to the Kiwis. Even though the left-arm spinner hasn’t been in the greatest of form this year, his presence itself adds potency to the New Zealand XI. That is why they will miss the services of Vettori at Jamaica.

There have been way too many loopholes in New Zealand’s game throughout the tour. Hence, no miracles can be expected this late in the series. In fact, their below-par fielding performance has given away the nervousness that exists in the present team. Any New Zealand team prides itself on its fielding effort even if it fails with the bat and the ball. However, at Antigua, they dropped catches by the dozen, misfielded on more occasions than expected, and were basically an unrecognisable fielding outfit. As it is, their batting and bowling have been no match to West Indies right throughout the tour. 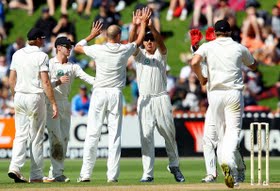 Although New Zealand batted better again Sunil Narine in the last game, expectedly since they have seen a fair bit of him now, the mystery spinner was still among the wickets. Unless and until the Kiwis manage to keep Narine at bay at Jamaica, they will continue to struggle there as well. Kemar Roach also bowled a superb spell in the second innings that took West Indies to victory. The problem with Kiwis’ batting has been that they have looked potent in phases, but haven’t managed to put together a solid batting performance.

Martin Guptill batted brilliantly for New Zealand in both the innings. If only he had got better support from the rest during stay at the crease, the visitors could have given West Indies a tougher fight.In Brendon McCullum, skipper Ross Taylor and the talented Kane Williamson they have batsmen who can put the host’s attack under pressure. But, it has been that kind of a series for New Zealand where only one batsman has managed to fire in one game. A repeat performance of the same would take them nowhere. Anyways, they have done little of note during this tour.

New Zealand’s bowling will also be under the pump at Jamaica. As mentioned at the beginning, Vettori won’t be part of the playing XI. As a result, a weak bowling attack will be further weakened. Apart from Chris Martin, none of the other bowlers are experienced. In spite of all their troubles, if New Zealand do find out a way to win, it should rate among their better ones in recent times.