Yuvraj career not over, 5-0 win against Australia unlikely: Ganguly

Former captain Sourav Ganguly feels that Yuvraj Singh’s international career might still not be over despite his axing for the Australia series.

Former captain Sourav Ganguly feels that Yuvraj Singh’s international career might still not be over despite his axing for the Australia series.

"Yes, yes he can make a comeback if he fights. why not, nothing is over till it's actually over,” said Ganguly, under whom Yuvraj made a sensational debut back in 2000, to PTI.

The retired cricketer added that India should the five-match ODI series against Australia, but did not predict a 5-0 whitewash. "At home, India will be very tough to beat. India wining 5-0 may not be possible as Australia are a strong side," Ganguly explained. 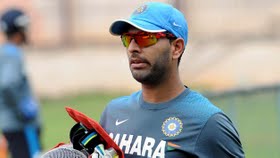 He also said that the selectors' rotation policy was the right one. "They (selectors) want to assess the youngsters. It's a good move looking ahead to the World Cup 2019. We have enough time to prepare. Everyone will get a chance, that's what you need in a team building," the former India skipper added.

The ODI series against Australia starts with the opening match on Chennai on September 17.