Much will be at stake for Kolkata Knight Riders and Sunrisers Hyderabad when they face each other in the eighth match of IPL 2020 at the Sheikh Zayed Stadium in Abu Dhabi on Saturday. KKR were brutally outdone by Mumbai Indians in the former’s opening encounter while Sunrisers Hyderabad endured an avoidable batting collapse against Royal Challengers Bangalore.

Almost everything that could go wrong for KKR against Mumbai, did. But, they also made some baffling tactical errors. Despite having a genuine fast bowler in Pat Cummins, IPL 2020’s record buy, Dinesh Karthik decided to open the bowling with the unheralded Sandeep Warrier. The inexperienced pacer sprayed the ball all-round and allowed Rohit Sharma to kick-start the innings. By the time Cummins came into bowl, Rohit had got his eye in, and the Aussie pacer could not exercise any control over him. 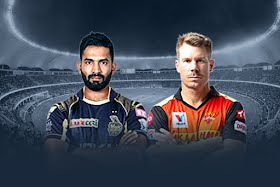 In the batting department as well, KKR, once again, rather inexplicably, held back their match-winning batsmen Andre Russell. The West Indian, who went into the game having smashed 510 runs last year at at strike rate of over 200, came in at number six, by which time the game was all but over. Surprisingly, captain Karthik himself came in at number three, a move that put additional pressure on the other batsmen. The tactic to send Sunil Narine to open also needs to be revisited against sides with pacy bowling attacks.

On the other hand, Sunrisers Hyderabad, who are known as an extremely balanced side, failed miserably with the bat against RCB. They were in command in the chase of 164 before a collapse of 7 for 32 saw them lose the match by 10 runs. SRH’s middle and lower order was completely exposed after Manish Pandey (34) and Jonny Bairstow (61) gave their wickets away. The injury to all-rounder Mitchell Marsh further compounded their miseries. It remains to be seen whether SRH will bring in Kane Williamson to add stability to the batting.

SRH’s bowling was reasonably good. Bhuvneshwar Kumar was on target as always while the other pacers did okay. There is a chance of Mohammed Nabi coming in to join his Afghan teammate Rashid Khan to strengthen the spin attack.

Head to Head record: In 17 contests between the two teams, KKR have won 10 and SRH seven.

The pitch at Abu Dhabi will be on the slower side with dew likely to play a role. Rohit Sharma made 80 from 54 vs KKR. So quick runs can be scored.

The weather will be in the mid-30s with humidity around 63 per cent.