The duo didn't go on an all out attack and kept the scoreboard ticking with cheeky singles, while hitting a six each in the first four overs.

Another six from Vijay off Chris Gayle brought up CSK's fifty in just 5.1 overs to stamp their early domination in the game as they picked 56 runs in the six overs of powerplay.

After the rollicking start, the duo didn't hold themselves back and intensified the assault, which saw the CSK hundred being raised in just 10.3 overs after Vijay's punishing 29-ball half century.

Vijay upped the ante from that point on, hitting fours and sixes almost at will. On the other end, experienced Hussey fed the strike to Vijay, picking an occasional boundary en route to his fifty in 40 balls. 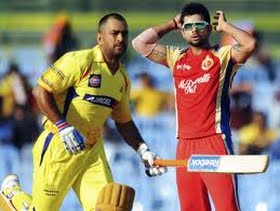 The Aussie left-hander smashed three sixes and as many boundaries in his smashing knock of 63 in 45 balls.

The Chepauk stadium braced up for the big IPL final here on Sunday as skippers of the two finalists - Chennai Super Kings (CSK) and Royal Challengers Bangalore (RCB) - walked in for the toss to a big roar. The coin fell in favour of CSK captain MS Dhoni, who decided to bat first in the big game against Daniel Vettori's men.

The game has been billed as Chennai's unbeaten home run versus Chris Gayle's blitzkrieg. While the Super Kings are still unbeaten at home in this edition of the Indian Premier League, orange capper Gayle has changed the fortunes of Bangalore with his 608 runs so far.

CSK entered the final by playing just one playoff game; however, RCB had to take the tough route as after losing to Chennai in the first qualifier, they had to beat Mumbai Indians in the second.

But it would be insane to think that it makes RCB better prepared for the big final. Chennai - who are the defending IPL and CLT20 champions - know what it takes to win the silverware, especially with a World Cup winning captain at the helm of affairs.