Going into the decider at Wankhede, no team in the series had won games chasing. And so, when AB de Villiers won the toss, and decided to bat, it wasn’t a great omen for MS Dhoni

Going into the decider at Wankhede, no team in the series had won games chasing. And so, when AB de Villiers won the toss, and decided to bat, it wasn’t a great omen for MS Dhoni. But, even in his worst nightmares, he wouldn’t have imagined what was to follow. Quinton de Kock, Faf du Plessis and skipper de Villiers all toyed with the Indian bowling, scoring whirlwind tons of varying measures, only the second time in ODIs that there have been three hundreds in an innings. The Proteas finished with an improbable 438, and the match was all but over at the halfway stage. Home boy Ajinkya Rahane showed some spark in his 87, but India lost by a massive 214 runs.

South Africa dominated from the very start as Hashim Amla sped away. The out of form batsman raced to 23 with the help of five fours before edging behind to Mohit Sharma. That was to be the only reason for India to smile on the day. The Indian pace duo of Bhuvneshwar Kumar and Mohit looked to dig it in short, but did not have the pace to trouble de Kock or du Plessis. De Kock pulled consistently well throughout the innings. With pacers struggling, Dhoni had to introduce Harbhajan Singh before the first 10 overs. He slowed down things slightly, but South Africa still motored along to 100 in 15 overs. 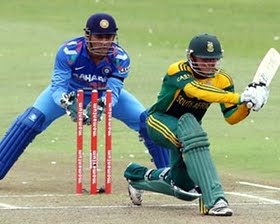 India’s only chance came when de Kock hit Amit Mishra to mid-off, but Mohit could not latch on to the chance. As he settled further, de Kock took on Harbhajan as well. He kept finding the boundaries at regular ease, and reached his century off only 78 balls. At the other end, du Plessis played himself in, as he was under no pressure at all. He enjoyed watching de Kock take on the hapless Indian bowlers. De Kock eventually fell for 109 from 87 balls, with 17 fours and a six, putting his side into a spectacular position, and from there du Plessis and de Villiers took over.

The South African skipper then came in and smashed a half-century off 34 balls. At the other end, du Plessis kept getting better and better. He was slightly slower during his first fifty, but raced to his second half-century in merely 44 balls. He began cramping, but kept going, and eventually retired hurt for 133. De Villiers however kept hitting boundary after boundary. He smashed 11 sixes in a century that he needed only 57 balls to reach. South Africa were 294 for 2 at the end of 40 overs, and they blasted at full speed towards the end to finish with 438.

India needed something spectacular to chase down 439. They must have been hoping for Rohit Sharma and Virat Kohli to fire. But, both of them perished as India couldn’t afford to relax from the start. Rahane and Shikhar Dhawan held fort for India for a while. But, Dhawan’s fifty wasn’t fast enough in the context of the match. Rahane played some brilliant strokes in his 87 from 58 balls, but there was too much for him to do. He perished to Dale Steyn, and India disintegrated to a rather embarrassing 214-run triumph.