After India, Dhoni no longer Pune captain as well

In a rather significant development, Australian skipper Steve Smith has been named as the captain of the IPL franchise Rising Pune Supergiants, replacing Mahendra Singh Dhoni. The news was confirmed by the franchise to the media on Sunday.

In a rather significant development, Australian skipper Steve Smith has been named as the captain of the IPL franchise Rising Pune Supergiants, replacing Mahendra Singh Dhoni. The news was confirmed by the franchise to the media on Sunday.

Dhoni has rich experience of IPL leadership as well. Under him, the now-defunct Chennai Super Kings won the IPL and the now scrapped Champions League T20, at their peak. However, Pune, who made their debut in the IPL last year, finished second last in the league table, perhaps prompting a change in guard at the top. 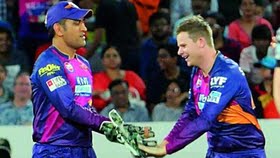 "I have the highest regard for MS Dhoni as a leader and a person. Dhoni will continue to be an important part of our team," Pune franchisee owner Sanjiv Goenka said in a statement.

"He is supportive of the decision keeping the franchisee's best interests in mind," Goenka added. Dhoni, who had retired from Test cricket in 2014, rather shockingly, also stepped down as India's limited-overs captain last month. During his tenure, he had led India to World Cup triumphs in the 20-overs and 50-overs format as well as the Champions Trophy.

In another significant development, Smith's Australia team mate and fast bowler Mitchell Starc has decided to pull out of this year's IPL, that kicks off on April 5.

"After a long summer and with a big tour of India still ahead I think it is in my best interests, both physically and mentally, for me to have a break, spend time with my family and take the opportunity to work on getting back to full fitness," Starc was quoted as saying in media reports.

The auction for IPL 10 will be held on Monday, February 20, with a number of big names in international cricket likely to go under the hammer.