Hosts West Indies drew the 2-match T20I Series against Australia by defeating the visitors by 14 runs at the Kensington Oval in Bridgetown, Barbados. It was a superb bowling performance that helped West Indies to defend a total of 160 in what was the second and final T20I. 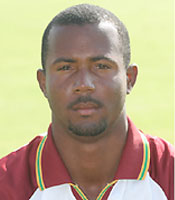 Batting first after winning the toss, West Indies got a strong opening of 72 for 1 in 6.4 overs with Johnson Charles smacking 37 from 21 balls with 6 fours and a six. His fellow opener Dwayne Smith did slightly better by scoring 63 which came in 34 balls with 6 fours and 4 sixes. The rest of the West Indian batsmen failed to consolidate on the openers’ efforts as the hosts collapsed to 160 all out in 19.4 overs. Brett Lee picked up 3 for 23 while Clint McKay and Shane Watson also bowled economically besides taking two wickets each.

Australia in their run chase had just one batsman going in the form of David Warner, who made 58 from 43 balls with 5 fours and 3 sixes. The rest of the batsmen couldn’t come up with anything significant to leave their side struggling to 146 for 9 in 20 overs. Fidel Edwards took 3 for 23 and Marlon Samuels bowled well too for his 3 for 23. Dwayne Smith got the Man of the Match award while Shane Watson got the Player of the Series award.