India consolidated their position on day three of the Indore Test, bowling out New Zealand for 299, and finishing the day with a lead of 276, with all 10 wickets in hand. Here’s a look at some interesting numbers from the third day’s play

India consolidated their position on day three of the Indore Test, bowling out New Zealand for 299, and finishing the day with a lead of 276, with all 10 wickets in hand. Here’s a look at some interesting numbers from the third day’s play.

Ravichandran Ashwin picked up yet another five-wicket haul, finishing with figures of 6 for 81 from 27.2 overs. This was his 20th five-for in Tests, making him the fastest Indian to reach the landmark. Harbhajan Singh was the previous quickest to take 20 five-wicket hauls. He needed 59 Tests to get there. Overall, Ashwin is the third quickest to 20 five-fors, behind Sydney Barnes (25 Tests) and Clarrie Grimmett (37 Tests).

This is Ashwin’s second six-for in the series. He had taken 6 for 132 in the second innings at Kanpur. Ashwin has been in excellent form over the last two Test series’. He claimed two five-wicket hauls in the series in West Indies at well – 7 for 83 at North Stand and 5 for 52 at Kingston.

Only two Indian bowlers were among the wickets in New Zealand’s first innings. Ashwin with six and Ravindra Jadeja with two. Three other bowlers were tried out – Mohammed Shami, Umesh Yadav and Murali Vijay, and they all went wicketless. The two others wickets fell to run outs – that of Martin Guptill and Jeetan Patel.

Ashwin has dismissed Kane Williamson in all three innings that the New Zealand captain has played on the tour. In the first innings of this Test, and in both innings of the opening Test at Kanpur. 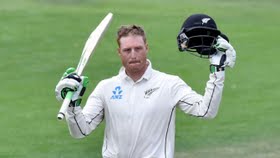 Latham and Guptill’s 118-run stand was the first century partnership by openers from a visiting team in India since Ed Cowan and David Warner did so in Mohali in 2013.

Tom Latham’s fifty means he has scored at least one half-century in every Test. His 53 at Indore was preceded by 58 at Kanpur and 74 at Kolkata. He made 55 in the practice match against Mumbai at Delhi as well.

New Zealand’s no.4 and no.5, Ross Taylor and Luke Ronchi both fell for ducks in the first innings, and in the same mode, caught Rahane bowled Ashwin.

While Ronchi has got runs in the previous Tests, Taylor’s series is only getting worse. Before his duck on Monday, his previous scores in the series read 0, 17, 36 and 4.

New Zealand were rescued to an extent by Jimmy Neesham’s 71. In three innings against India, the all-rounder has accumulated 241 runs. On his debut against the same team at Wellington in 2013-14, he made 137 not out and 33.