Under fire Pakistan batsman, the veteran Younis Khan, has decided to hang his boots from one-day internationals at the end of the ongoing World Cup. Younis has been heavily criticised for his performance in the first two matches

Under fire Pakistan batsman, the veteran Younis Khan, has decided to hang his boots from one-day internationals at the end of the ongoing World Cup. Younis has been heavily criticised for his performance in the first two matches, having made only 6 and 0, and there have been calls from various ex-Pakistan players and critics asking him to quit the one-day version. One former player even went to the extent of stating that Khan must request the team management to rest him. The veteran batsman will, however, continue to play the Test format.

Khan, who is 37, surprisingly took to Twitter to announce his decision rather than making it official. His Twitter post on Tuesday read, "I will retire from ODI cricket after 2015 World Cup .Will continue to play Test cricket." He latter added another tweet stating, "Thank you so much for all your support and prayers throughout my ODI career... it means a lot to me..love you all!" 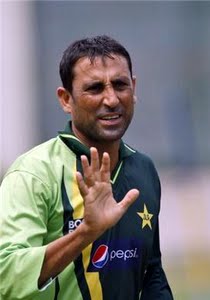 In an ODI career spanning a decade and a half, Khan has so far scored 7203 ODI runs at an average of 31.31. He is the sixth highest scorer for Pakistan in the one-day format, and has seven one-day tons to his name. Khan was a surprise selection in the Pakistan squad for World Cup, but got the nod owing to his invaluable experience. He gave a new lease of life to his one-day career by scoring a hundred in the fourth ODI against New Zealand against Abu Dhabi, but his one-day fortunes have been on the downslide since.

Pakistan have had a miserable start to their World Cup campaign, losing heavily to India and West Indies. Khan opened the innings against India, a move which did not go down well with many former cricketers. He batted at number three against West Indies, but failed again, prompting him to announce the decision to retire from ODIs only a few months after making a comeback to the format.