The West Indies have recalled star batsman Ramnaresh Sarwan after a long gap of 18 months. Sarwan finds himself in a 15-man squad to play a 5-ODI Series in Australia.

The West Indies have recalled star batsman Ramnaresh Sarwan after a long gap of 18 months. Sarwan finds himself in a 15-man squad to play a 5-ODI Series in Australia. All-rounder Darren Sammy will lead the West Indies team while Dwayne Bravo returns from his injury to play the role of the Vice-Captain. 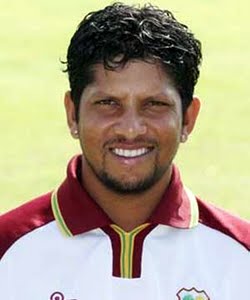 Sarwan’s inclusion does boost the West Indies batting line up especially in the tough conditions down under. 32-year-old Guyanese has the experience of playing 173 ODIs scoring 5644 runs at an impressive average of 43.41. In the 87 Tests that he has played, Sarwan had scored his runs at an equally impressive average of 40.01. It is quite strange that a player of such quality has been ignored by the West Indies of late with the reasons being more to do with off the field incidents. For the record, Sarwan last played for the West Indies in 2011.

Meanwhile, the West Indies have lost the services of the in-form Marlon Samuels because of a facial injury he sustained during his stint with the Big Bash League in Australia. Samuels was struck on his face by a short ball from Lasith Malinga during one of the T20 league matches.

The ODI Series between Australia and West Indies begins on the 1st of next month.